The Earth-Ocean Interactions (EOI) Program contributes to NOAA’s objective of achieving a holistic understanding of marine ecosystems by exploration and research on hydrothermal vents and methane seeps, their impacts on the global ocean, and their unique chemosynthetic biological communities. This includes seafloor mapping, ecosystem characterization, resource assessment, environmental observation, and technology development.

A team of scientists from the Oregon State University (CIMRS), the University of Washington (CICOES) and NOAA PMEL forms the EOI program. The program has an almost 40-year history of exploration, discovery, and research by combining a wide range of scientific expertise and advanced technologies in an interdisciplinary approach to hydrothermal and seep ecosystem studies. The OSU CIMRS members of the EOI team are located at the Hatfield Marine Science Center in Newport, OR. They focus on mapping the seafloor and the water column and on studying the geochemical composition of these vents and seeps. Every new discovery usually starts with a very detailed map of the seafloor and the observation of physical and chemical changes in the water column. Follow along with the EOI team and explore the ocean for hydrothermal vents and methane seeps.

Mariana Back-arc, in the western Pacific US Exclusive Economic Zone (EEZ).  The fly-through depicts the seafloor in this area of the Mariana Trench (purple at the bottom of image), then north along the Mariana Arc to the Japanese EEZ in the north. Bathymetry data are  colored depending on depth (purple is deepest, red is shallowest, green are islands above sea-level). White line indicates the back-arc spreading axis. The data are five times vertically exaggerated. Video by Susan Merle, NOAA PMEL EOI program.

Fly-through overview of seafloor and water column data collected along the Cascadia margin from Northern California to Vancouver Island.  The seafloor multibeam bathymetry data are brightly colored, overlaid on a bathymetry compilation from Chris Goldfinger (muted colors). The scene is 4 times vertically exaggerated.  The black flags represent methane bubble streams emanating from the seafloor discovered on 8 multibeam expeditions and from fisheries sonar data.  Over 3000 individual bubble streams have been discovered within the past several years.  (Data presented in Merle et al. 2021). Video by Susan Merle, NOAA PMEL EOI program.

Hunting for Physical and Chemical Anomalies 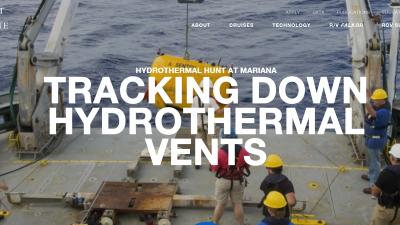 Scattered along the barren ocean floor lie uncounted hydrothermal vent sites—oases of hot, chemical-rich, life-nurturing fluids. Read the R/V Falkor cruise log entry about the Hydrothermal Hunt at the Mariana back-arc in 2015 and learn the ingredients for a successful exploration and new discoveries.

After successfully identifying the location of a new hydrothermal vent, we want to explore it with a remotely operated vehicle (ROV) equipped with video cameras and sampling devices. Watch a time-lapse of the deployment of ROV Jason during an Axial Seamount cruise on the R/V Kilo Moana in 2018.

Experience the eruption of the submarine volcano West Mata in the NE Lau Basin in 2009. This video was captured by the ROV Jason during the 2009 NE Lau Response Cruise on the R/V Thompson.

This video was obtained by a camera mounted on the Jason autonomous underwater vehicle. The Jason team and scientists were on board the Research Vessel Thomas G. Thompson. Jason was lowered to the site 4000’ below on a ~3/4” fiber optic cable while the ship held position above. The pilots maneuvered the Jason carefully into position to view the eruption. The sound on the video clips was recorded separately on a hydrophone (underwater microphone) placed on the seafloor about 50’ away and later synchronized to the video. This video sequence shows a sequence of explosive degassing events as bubbles of gas-rich magma burst, spewing lava fragments into water. At same time, lava is being extruded out of vent and downslope. Area in view is about 6-10 feet across. Location: Hades Vent, summit of West Mata Volcano, 1205 m (3952 feet), 15° 05.68´S; 173° 44.95´W

Wondering how samples get collected at hydrothermal vents? Watch fluid sampling highlights from the Axial Seamount 2017 cruise on the R/V Thomas G. Thompson.

Watch methane hydrates and bubble streams rising from the Astoria Canyon seafloor captured during the E/V Nautilus in 2016.

This video sequence was captured by the remotely operated vehicle (ROV) Hercules during the Cascadia Margin 2016 cruise on the exploration vessel E/V Nautilus (Ocean Exploration Trust). It shows methane bubbles rising from an exposed hydrate deposit on the Astoria Canyon seafloor.

This video sequence was captured by the remotely operated vehicle (ROV) Hercules during the Cascadia Margin 2016 cruise on the exploration vessel E/V Nautilus (Ocean Exploration Trust). It shows methane gas captured underneath a carbonate platform and released in small busts.

Weekly Summaries From a Hydrothermal Exhibition

Follow the EOI team and their collaborators along on the Underwater Fire R/V Falkor cruise in the NE Lau Basin in 2017. See how the cruise unfolds in their weekly summaries: