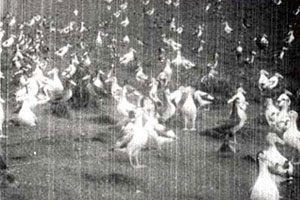 Short-tailed albatrosses (Phoebastria albatrus) once numbered in the millions before commercial hunting in the early 20th century nearly drove the species to extinction. During the past 60 years the population has steadily increased, but is still less than 1% of its estimated pre-exploitation population size. Of the two major current breeding colonies, one is within an island group, the Senkaku Islands, of disputed ownership between Japan and China. A de-facto refuge, biologists have not been allowed access to conduct population surveys since 2002, however, the Senkakus may contain 20% of the total breeding population of short-tailed albatross. 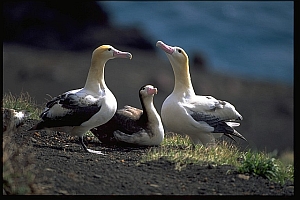 In 2015, we aim to test whether breeding populations of short-tailed albatross can be estimated using satellite data from DigitalGlobe’s WorldView-2 and WorldView-3 Satellite with ENVI image processing software. Using several albatross species at multiple colonies in Hawaii and Japan will allow us to test species identification accuracy and determine the correction factor(s) needed to ground truth satellite counts of unknown populations on the Senkakus. Based on preliminary imagery work, this method may be helpful scientists and resource managers looking to estimate remote and/or inaccessible areas, or areas at more frequent intervals, especially where human presence impacts ground-based counts or disturbs other species.