Short-tailed albatrosses (Phoebastria albatrus) once numbered in the millions before commercial hunting in the early 20th century nearly drove the species to extinction. While the population continues to increase, it is still less than 1% of its estimated pre-exploitation population size and breeds on only 2 of the possibly 14 historical sites in the western North Pacific. Furthermore, one of these islands (Torishima, Izu Islands) is volcanically unstable and the other (Minami Kojima, Senkaku Islands) is part of a multi-national territorial dispute and, therefore, politically unstable. This species is listed as endangered under the U.S. Endangered Species Act (ESA) and delisting criteria require a third breeding colony to be established on a “safe” island.

To expedite the establishment of a third colony, a chick translocation and hand-rearing program was initiated in 2006. The first two years were trials with surrogate species and the short-tailed albatross translocations occurred over the following five years. 2012 breeding was the fifth and final year of the translocation and hand-rearing project. The main focus of research was to experimentally test the efficacy of translocation and hand-rearing of albatross chicks by comparing growth, physiological health indices, post-fledging survival, and migration patterns with a control group of naturally-reared chicks at the source population. Because albatrosses remain at sea for several years before returning to breed, we used small, solar powered GPS tracking devices to track their progress after leaving the colony. This allowed us to make annual adjustments in rearing methods that could help increase survival post-fledging.

Success will ultimately be judged by continued recruitment and breeding at the new colony site in future decades, however, successes to date are beyond initial expectations with a marked increase in visitation of the new colony site by hand- and  naturally-reared birds, including two pairs, one of which laid the first egg at the translocation site in November 2012 and by May 2016 three pairs short-tailed albatross pairs had raised chicks on Mukojima and neighboring islands!  These are the first breeders in the Ogasawara (Bonin) Islands since their extirpation in the 1930s - over 80 years ago! Many of the fledglings that we tracked (one continuously for 5 years!) traveled into U.S. waters allowing us to evaluate important habitats for this species and potential fishery interactions. This latter contribution is particularly important because the juvenile age class appears to have very different movement and distribution patterns than adults/sub-adults and therefore overlap a larger variety of fisheries. Ultimately, this project aims to expedite the recovery of this endangered species. To learn more about these and other efforts to enhance short-tailed albatross recovery, check out the USFWS website Short-tailed Albatross Central. 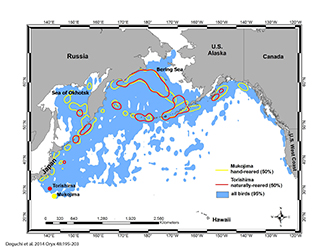