With the use of individual tracking devices, we are filling these knowledge gaps for representative resident and migrant species. Additionally, we aim to model three-dimensional movement of birds using tags that carry altimeters. The study also will include retrospective analyses of previous tracking data and vessel transect data and physical variables to improve predictive habitat-use models. Tracking data will allow for development of spatial-vulnerability models for offshore renewable energy development.  This study will also contribute to the California Current System Seabird Telemetry Atlas that is maintained by the U.S. Geological Survey (USGS).

In spring 2015, we began tracking Common Murres, Western Gulls, and Pink-footed Shearwaters, and in 2016 we added Pacific Loons.

Common Murres nest at Yaquina Head, here in Newport, Oregon, where we monitor their reproductive biology. We started a satellite tracking study here in 2015, with additional deployments in 2016 and 2017. Seabird Oceanography Lab graduate student Stephanie Loredo is using this data for her M.S. thesis. Follow this link to a blog post written by Stephanie describing the project and results so far. 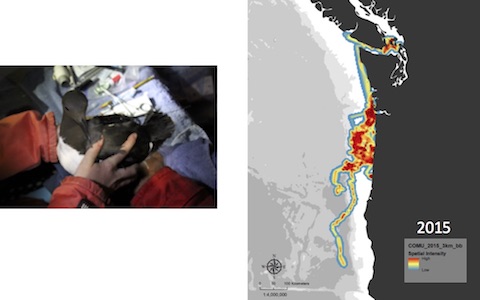 Western Gulls breed in small colonies on the off-shore rocks all along the Oregon Coast. In 2015, we initiated a tracking study at the small colony of Cleft-in-the-Rock just north of Cape Perpetua and located in the Marine Protected Area. You can find blog posts describing the results of this season here and here. We found that the birds forage relatively close to shore, so in 2016 we tracked birds from a second colony in southern Oregon located on Hunter’s Island just south of Cape Sebastian. Here birds traveled much farther off-shore and made trips into California waters!  In 2017, we are planning on deploying solar charged transmitters to track individual movements and flight heights into the fall and winter.

Pacific Loons breed in the Arctic, but migrate through Oregon waters in the spring and fall.  You can explore the tracks here.

‹ Movement Ecology up Albatross Marine Habitat Use and Biogeography ›