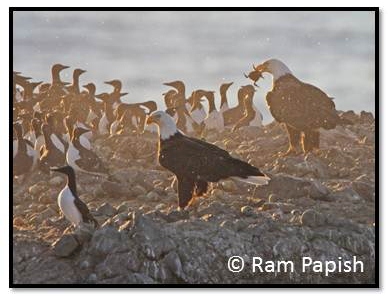 Seabird populations are not only affected by “bottom-up” changes in prey abundance, but also “top-down” effects of predators. The interaction of predators and prey can be quite dramatic at large seabird colonies, such as Yaquina Head in Newport.  Here the colony of 60,000-80,000 common murres (Uria aalge) is often a target of transient and locally nesting bald eagles (Haliaeetus leucocephalus).  Whereas the eagles do create the majority of disturbances at this colony and take a fair number of murres, the greatest overall reproductive loss for murres is from secondary predators such as western gulls (Larus occidentalis) that prey upon murre eggs and chicks left unattended when eagles cause adult murres to leave the colony.  By including additional study colonies on the north and south Oregon coast, we see that the amount of eagle disturbance can vary markedly.  Additionally, since 2010 we have seen an increase in other murre egg and chick predators, such as brown pelicans (Pelecanus occidentalis) and turkey vultures (Cathartes aura).  Trying to disentangle to what degree murre reproductive output is limited by “bottom-up” or “top-down” forces can be quite challenging and is one of our primary objectives.

We are also studying coast-wide population changes of common murres and bald eagles.  Since 1988, the Oregon murre population has experience some regional redistribution along with a slight decline in overall population size.  During this same time period, the bald eagle population has increased more than 10X, and was removed from the Endangered Species list.  The increasing eagle populations are no doubt having an impact on breeding seabirds, especially colonial surface nesting species such as common murres. Fortunately long-term population and colony/nest site location data have been collected over several decades.  Analyzing these historical datasets will provide a much better understanding of factors affecting the statewide meta-population dynamics of murres.  Whether we are witnessing a rebalancing of predator-prey populations or eagles recovering into a coastal ecosystem that is very different than what they historically inhabited is uncertain.  This question will no doubt lead to additional intriguing investigations.