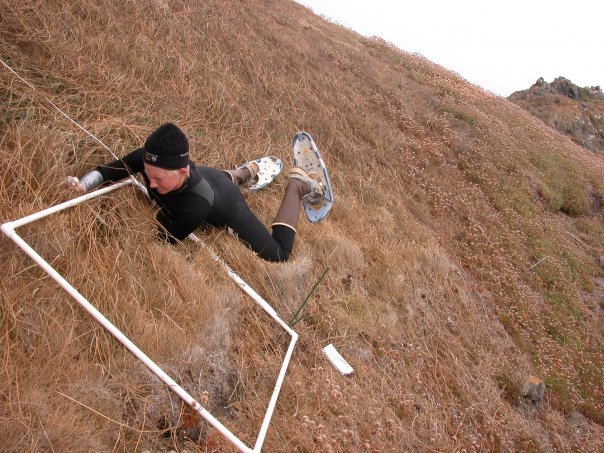 The traditional methods for estimating burrow occupancy include "grubbing" (reaching into the burrow) (Kocourek et al. 2009), using a burrow camera, or using audio playback. Cameras are less invasive than grubbing, but depending on species can be less accurate in determining occupancy (Hamilton 2000, Mckechnie et al. 2007). Additionally, relatively small occupancy errors can change population estimates by two or more orders of magnitude since. Mark-recapture estimates can improve population estimates (Sheffield et al. 2006, Sutherland and Dann 2012), but they are much more labor-intensive. All of these techniques require direct monitoring of the contents of each individual burrow. On the Oregon coast, this requires access to steep-sided, rocky offshore islands during the peak breeding season (June/July) when seasonal winds often create hazardous boating conditions. In addition, grubbing at the many plots needed to extrapolate to population estimates is extremely time consuming and causes unintentional harm to birds and burrows.

We are developing methods that are cost-effective and can be used in routine monitoring to track population trends.  We simultaneously collected and integrate data from multiple remote sensors of audio, imagery, and radar surveys to calculate abundance indices that were compared to burrow occupancy. The use of remote methods to monitor individual burrows or groups of burrows over the entire season could result in improved measures of abundance and reproductive success while minimizing negative impacts and logistical constraints associated with traditional methods.