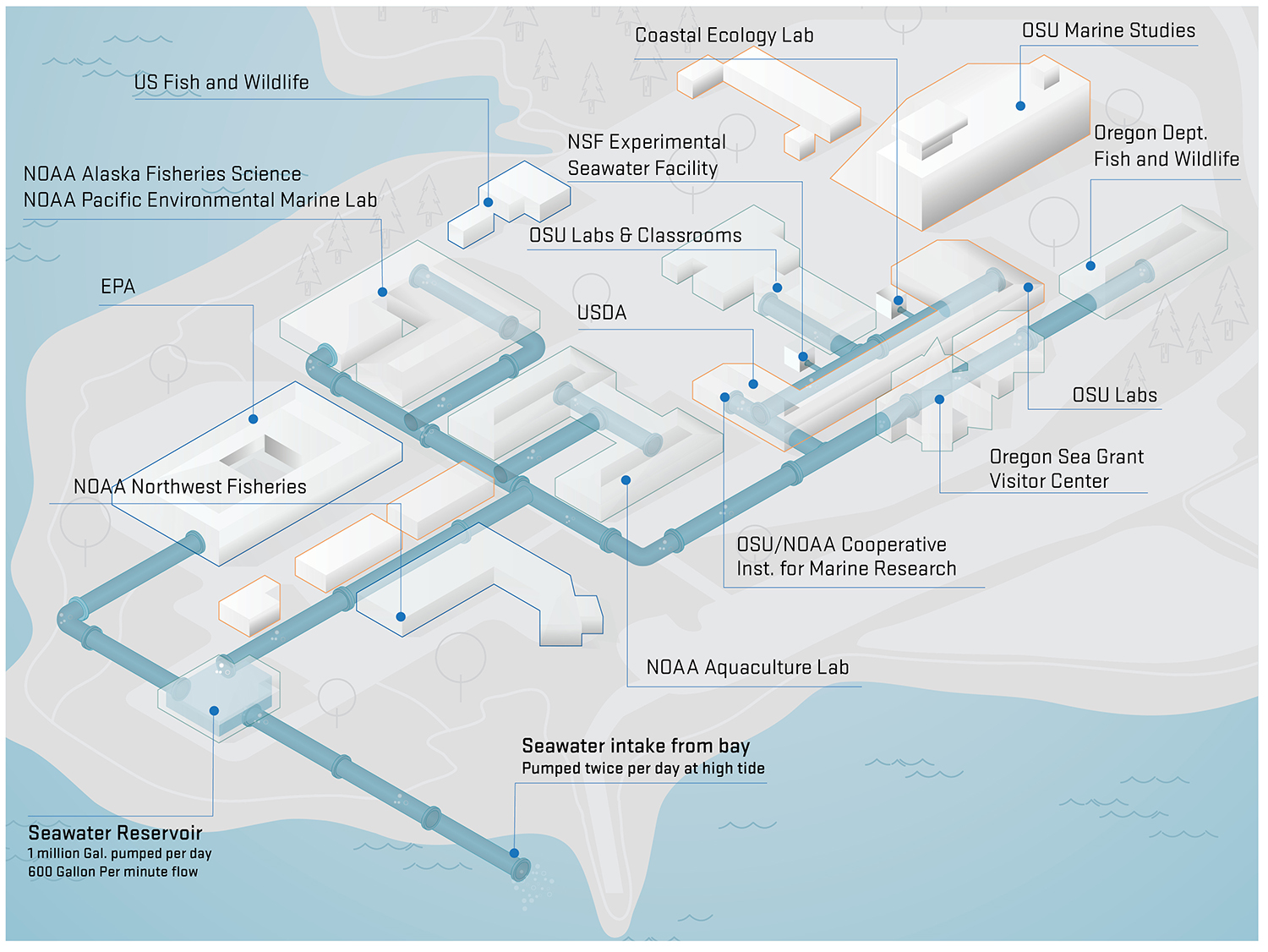 The Hatfield Marine Science Center has a sophisticated seawater distribution system providing reliable access to high-quality seawater needed for a variety of experiments and research. This system supports fish and animals used for research, education and outreach programs, such as aquariums and display tanks within the Visitor Center.

Many scientists use this system to research species that occupy the environment offshore, benefiting from the comfort and control provided by a laboratory on land. Since its initial installation in 1965, the seawater system has been an ongoing collaboratively partnered project by all the different agencies that call Hatfield their home.

Over the years, all of the tanks have been upgraded, and new filtration and sterilization systems have been implemented. It has been a group effort to keep the system operational and funded. In August 2021, $5 million was approved by the OSU Board of Trustees to improve the system. As part of the renovation, the causeway and pump portions of the system that take seawater from Yaquina Bay in Newport will be replaced.

Director Bob Cowen said upgrading the seawater system is essential for the Hatfield campus to have sufficient, reliable and high-quality seawater. “This seawater system puts OSU’s Hatfield Marine Science Center on the map nationally and globally and draws research faculty, staff, students and members of the public to what we do here,” he said.

The seawater system (pdf) allows 40 researchers and their labs the ability to conduct cutting-edge research within critical lines of inquiry:

The seawater system allows Hatfield to be a significant contributor to solving global problems and building tomorrow's workforce. 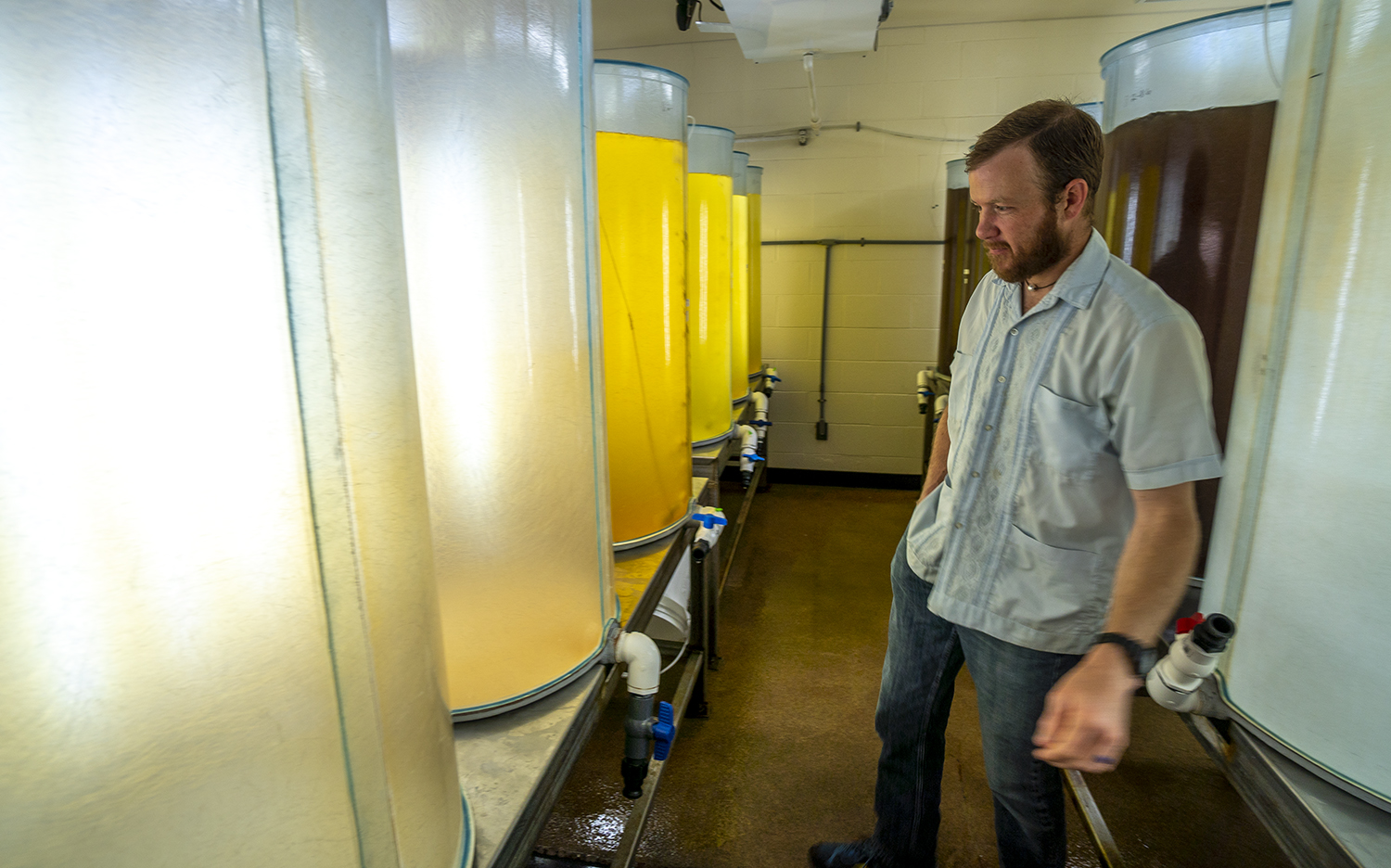 How the Seawater System Works

Seawater is pumped from Yaquina Bay at the top of the high tide cycle as it occurs twice a day, approximately 12 hours apart. To maintain salinity above 28 parts per thousand (PPT) while catching the cool inrush of seawater fresh from the Pacific Ocean, it is important to capture seawater only at these specific times. Unless the demand for seawater is high, two of the four 50 horsepower pumps are turned on 90 minutes before high tide and turned off 90 minutes after high water. The pumps can, under normal conditions, be operated up to two hours before and after high water, and still provide quality seawater to the system.

The process starts as one of the four vacuum pumps begins to pull water up through the strainers on the end of the suction pipe (some 16 feet below the high-water mark) into the volute of the pump. When the pump is full, the impeller begins to spin, building up pressure and sending seawater rushing through a 10-inch pipe at velocity that delivers up to 2000 gallons per minute (GPM) to an enclosed reservoir. Five minutes after the first pump starts, a second pump follows the same chain of events and now two pumps are delivering up to 4000 GPM to the reservoir.

The system of pumps and lines running from the pump house to the seawater reservoir is designed to provide total redundancy. This is an important feature, as it allows half the system to lay idle, while tiny animals in the trapped seawater consume the available oxygen and begin to die off, slowly turning the seawater to an anaerobic state. As a result of the decomposition, hydrogen sulfide is formed and turns the inside of the seawater system into a lethal soup that serves to prevent the growth of marine organisms from getting out of hand.

Although seawater is allowed to sit in the pipes linking the pump house to the reservoir in an anaerobic state for six weeks, the pipe walls are still subject to the growth of marine organisms. To remedy this problem, large foam bullets called “pigs” are sent through the seawater pipes once a year. The pig is placed in the 10-inch seawater pipe through a “Y” fitting located just outside the pump house. After the pig is in the line, a cap is bolted on to the “Y” trapping the pig in the pipe. At the other end of the pipe, the cap is removed from another “Y” fitting. When the pump is turned on, a tremendous pressure per square inch (PSI) is developed, sending the pig forward through the pipe, dislodging mussels, gooseneck barnacles and other unwanted inhabitants. Unwanted guests begin to pile up in front of the pig as it makes its way through the pipe. About 15 seconds after the pump has started, barnacles, mussels and the pig emerge from the open flange of the “Y” at the reservoir, some 200 yards from the pump house. The plume shoots nearly seven feet in the air and is followed by a river of clean seawater until the pump is turned off.

When the seawater reaches the reservoir, it is sent through a manifold to four tanks, which can be filled to capacity at the same time, storing up to 800,000 gallons of seawater. On an average day, we consume a little over 600 GPM. The dock pumps will deliver over 1,000,000 gallons of seawater to the reservoir in two 3-hour pump cycles. The reservoir serves two primary functions; one is to hold the cool high salinity seawater until it is needed throughout the day, the other is to allow seawater to rest without being buffeted by wind or tide, enabling both organic and inorganic matter to settle out.

Water is drawn out of all four tanks in a manner that causes their level to fall equally through all tanks. A small percentage of the seawater is sent to the Environmental Protection Agency’s (EPA) seawater laboratory next door to the reservoir without receiving any further filtering. This seawater is referred to as raw seawater. It is pumped to the EPA through one of two 15 horsepower pumps. One of two 25 horsepower pumps pushes water through our Neptune Benson sand filters and on to the rest of the campus serving OSU, NOAA, EPA, USDA, and ODF&W with seawater that is filtered to 50 microns.

After the seawater has been filtered it is carried over to the main campus in eight-inch schedule 80 PVC pipes and is distributed into smaller lines to the Research Support Facility, the Visitor Center, the Education Wing, ODFW, and other buildings. Before entering the Disease Wing, the seawater is exposed to ultraviolet light to sterilize it. This water is considered to be pathogen-free seawater and is referred to as “P” water.

The system that Hatfield uses to supply seawater to end-users is called a flow-through system, where seawater is used once and returned to the bay. If, however, there is any chance that the seawater has been exposed to possible pathogens, the seawater is shunted to our chlorine treatment plant. Seawater that enters the treatment facility is exposed to chlorine for a given amount of time and returned to the bay cleaner than when it entered the pumps at the dock. Not only is the seawater treated with chlorine, it is treated again with another chemical that neutralizes any residual chlorine left in the seawater. The seawater is checked randomly as it reenters Yaquina Bay by an independent laboratory to assure that Department of Environmental Quality (DEQ) rules are not violated. If seawater is exposed to even more potentially dangerous pathogens, it is treated with ultraviolet light and filtered to less than one micron before it is allowed to reach the chlorine raceway. Most seawater, however, is untreated as it returns to the bay.

Seawater from ODF&W, Hatfield’s Visitor Center, the East Wing, and the West Wing combine to a single outfall that enters Yaquina Bay in the cove near the ship support dock. Seawater from the Hatfield Education Wing flows through a trough along the road near the library, flowing into a small creek that enters the mudflat area to the south of the Hatfield campus. Water from all NOAA buildings and the EPA buildings flow into a common channel that enters the Bay on the east side of the seawater dock at Hatfield.