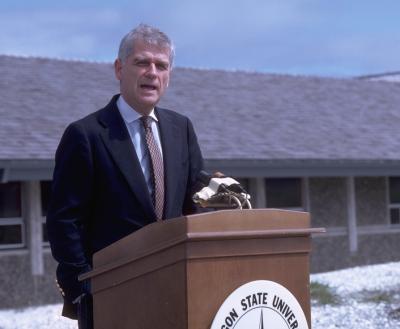 The Hatfield Marine Science Center began as a small, one-building fisheries laboratory in the early 1900s. Since then, it has grown into a 40-acre collaborative research and education campus.

Hatfield officially opened in 1965, welcoming 50,000 visitors in its first year and helping OSU develop its extensive marine research and education program. As the Hatfield grew, educators and researchers were brought on board, and additional wings and buildings were built to accommodate new programs and organizations.

In 1983, it was officially named the Mark O. Hatfield Marine Science Center in honor of U.S. Senator Mark Hatfield (pictured here at the dedication). He supported the center during its conception and construction. Over the past several decades, Hatfield has grown to include groundbreaking research programs dedicated to marine mammals, wildlife refuges, fisheries, underwater volcanoes, and marine animal genetics.

Today, Hatfield enjoys collaborations with six state and federal agencies; it hosts student programs from OSU to students in grades K-12 and works to educate the public on oceanographic topics.

‹ Map and Directions up Make a Gift ›