Aquaculture and the Langdon Lab

In the Langdon lab, we undertake a range of research projects that support sustainable aquaculture in Oregon and the U.S. west coast.

Research at the Hatfield Marine Science Center (HMSC) has supported Pacific oyster farmers and hatcheries for over 80 years. Currently, the Molluscan Broodstock Program (MBP) is selecting Pacific oysters to enhance their resistance to both ocean acidification and a very serious oyster viral pathogen (oyster herpes virus OsHV-1) that has decimated oyster crops around the world. MBP is also selecting oysters for higher yields and improved appearance for oyster consumers. In this project, we are working closely with the USDA/ARS shellfish program that was established at HMSC in 2003.

Oyster hatcheries are not only being impacted by ocean acidification –a symptom of higher concentrations of atmospheric carbon dioxide, but they are also being impacted by outbreaks of the pathogenic bacterium Vibrio coralliilyticus. In our lab, we are working on using probiotics to suppress this oyster disease so that hatcheries can dependably produce high-quality seed for oyster farmers.

Lastly, we have joined a group of other OSU scientists to determine the effects of microplastics on oysters and other marine shellfish. Production and accumulation of plastics in our oceans is becoming a major concern as plastics are now found in even remote places, such as the deep sea and Antarctica. Little is known about the potential impacts of plastics on marine ecosystems and what strategies can be adopted to minimize future risks.

Apart from oysters, we are also working on the development of micro-particulate diets for marine fish larvae. Expansion of marine fish culture is hindered by poor survival of the larval stages which require microscopic-sized food. We have developed different micro-particle types to deliver nutrients and other materials to larvae in order to enhance their survival and growth. Eventually, we hope to be able to use artificial micro-particulate diets to replace expensive living prey species, such as rotifers and Artemia, that are currently used to rear marine fish larvae.

Dulse -“the seaweed that tastes like bacon when deep-fried” –is still a major focus of the lab. We are exploring the use of panels to culture dulse in raceways as well as developing some interesting varieties that have appealing shapes and colors. We are hoping the dulse will become a common addition to seafood dishes as well as possibly a healthy substitute for bacon!

Tour of the facilities and rearing systems of the Molluscan Broodstock Program (MBP). This video shows the algal culture systems, larval and juvenile rearing systems and seawater supply, as well as some of the operational details of MBP for the selection of desirable characteristics of this important West Coast aquaculture species.

This video describes the goals of the Molluscan Broodstock Program (MBP) that is designed to improve desirable traits of the Pacific oyster on the U.S. West Coast. 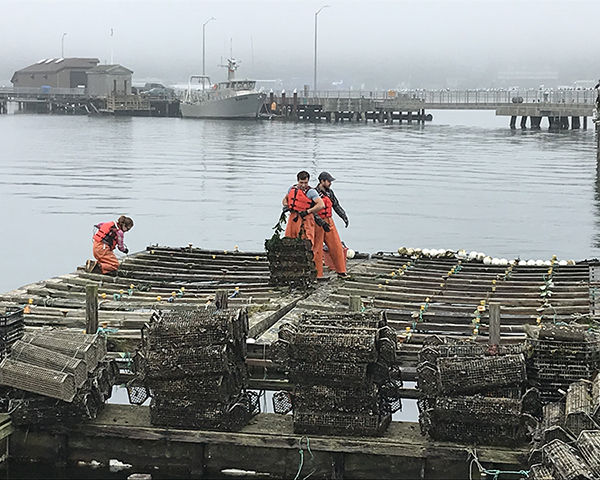 The MBP crew works on the broodstock raft in Yaquina Bay. 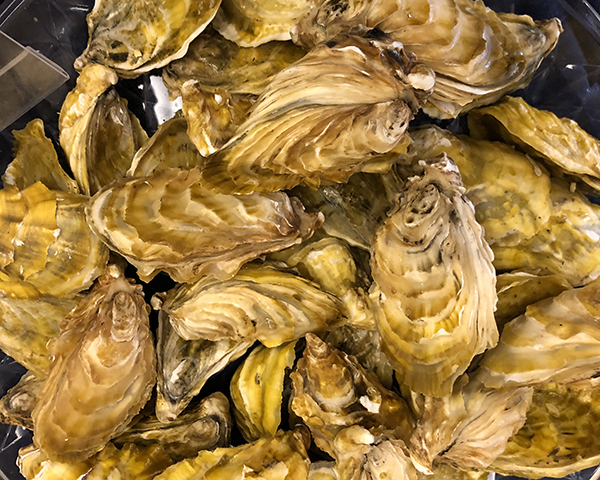 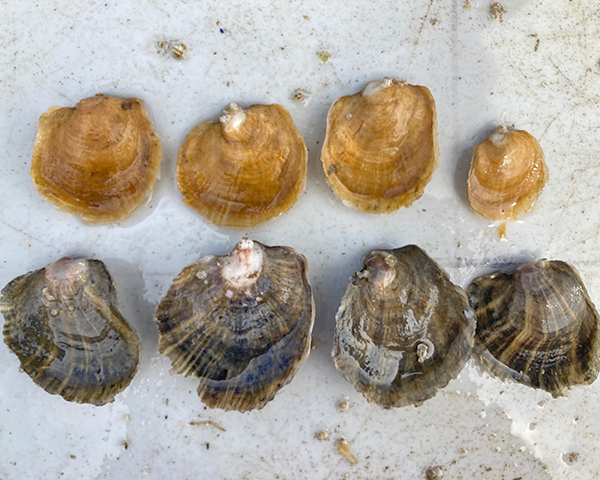 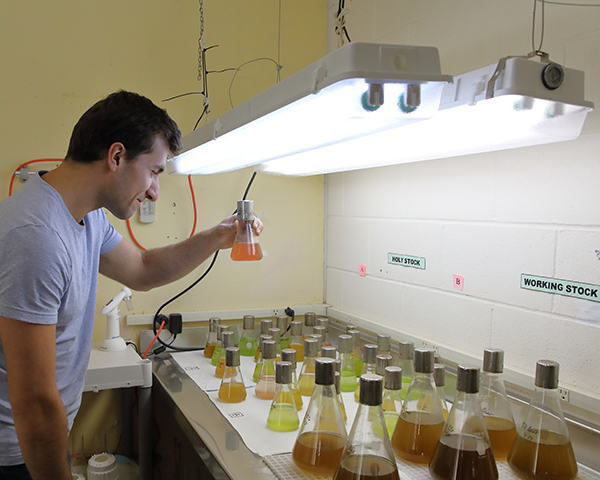 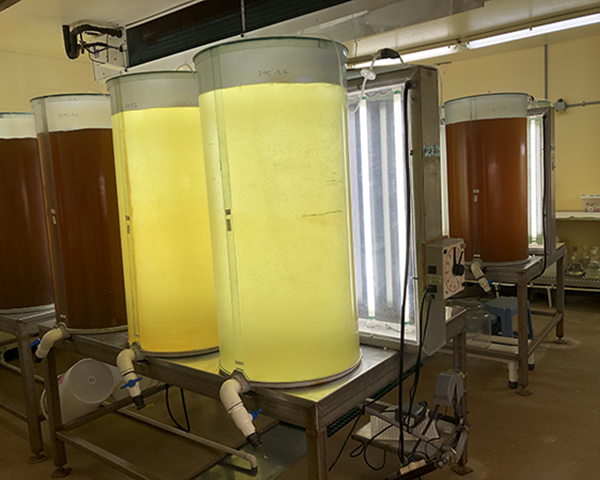 Join Dr. Langdon for a brief tour and description of the Coastal Oregon Marine Experiment Station's Dulse production and research efforts. Dulse is a nutrient-dense, bright red marine algae, which has been well documented due to the bacon-like flavor of one specific variety when fried. OSU patented this particular strain, which is high in protein (20%), vitamins and minerals. Dulse grows very quickly in recirculating aquaculture tanks, meaning it could be part of the solution to feeding our rapidly increasing global population. 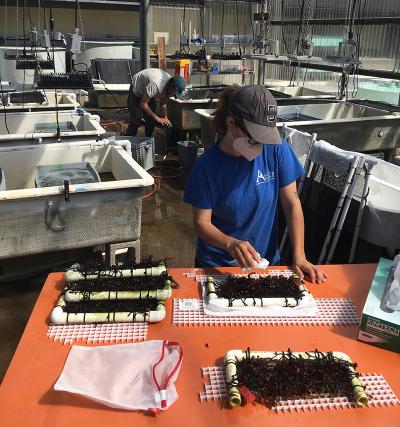 Collecting interim data on experimental dulse panels in the NAL greenhouse. Dulse grows quickly in recirculating aquaculture tanks, which means that it could be part of the solution to feeding our rapidly increasing global population. 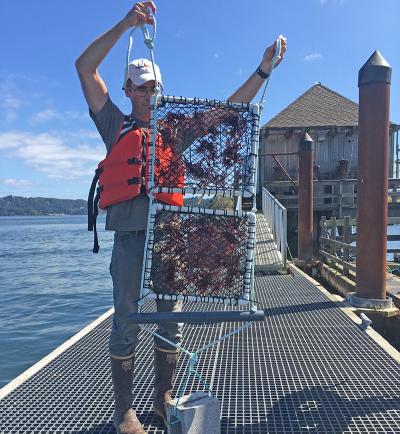 Experimental dulse panel being prepared for deployment off HMSC dock. OSU has patented this particular strain, which has a high content of protein (20%), vitamins and minerals. 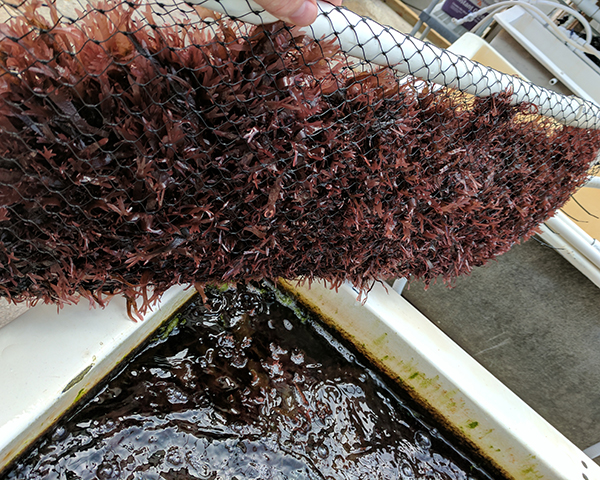 Dulse under a microscope. 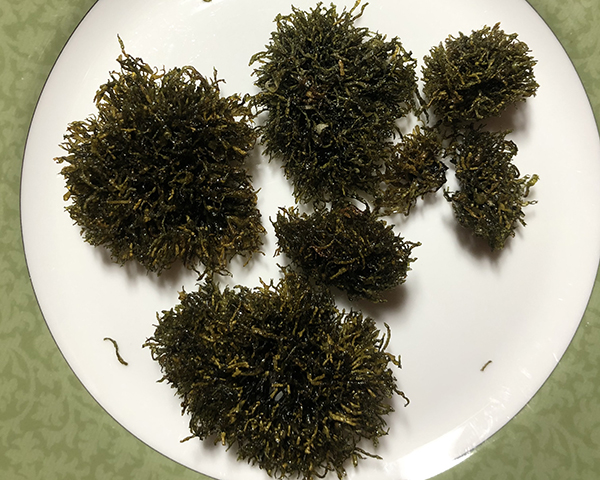 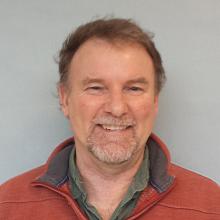 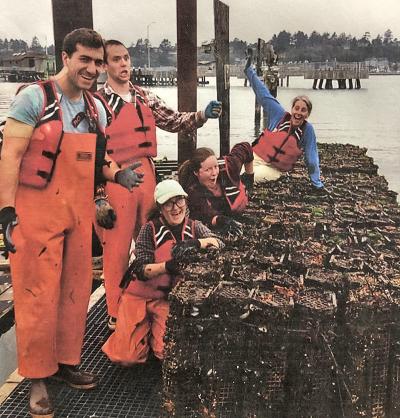