Albatross Marine Habitat Use and Biogeography

Albatrosses are well-known for making long-distance flights, often crossing entire ocean basins, including circumnavigations of the globe. Another aspect of albatross flight that is quite remarkable is the efficiency by which they accomplish such long distance travels.  High flight efficiency requiring relatively low energy expenditure for albatrosses is a combination of a body morphology designed for gliding flight and the use of some of the windiest regions of the globe that permit dynamic soaring of large-bodied birds.  These long distance travels, of course, are not without cause, among the most important being to seek out productive feeding areas, and in some cases, venturing into low wind speed regions to capitalize on abundant food sources.  For over a decade, we have used tracking devices to study the at-sea distribution of North Pacific Albatrosses (Phoebastria spp.) with respect to satellite remotely sensed environmental variables (e.g., wind speed, sea surface temperature, chlorophyll a concentration, etc.), marine habitats (e.g., seamounts and submarine canyons), national and international boundaries, and commercial fisheries.   Through this sustained research effort we have gained novel insight into environmental factors affecting foraging destinations and migration, interspecific differences in marine habitat use, as well as effects of ontogeny and physiological stressful periods of flight feather molt on the at-sea distribution of North Pacific albatrosses. 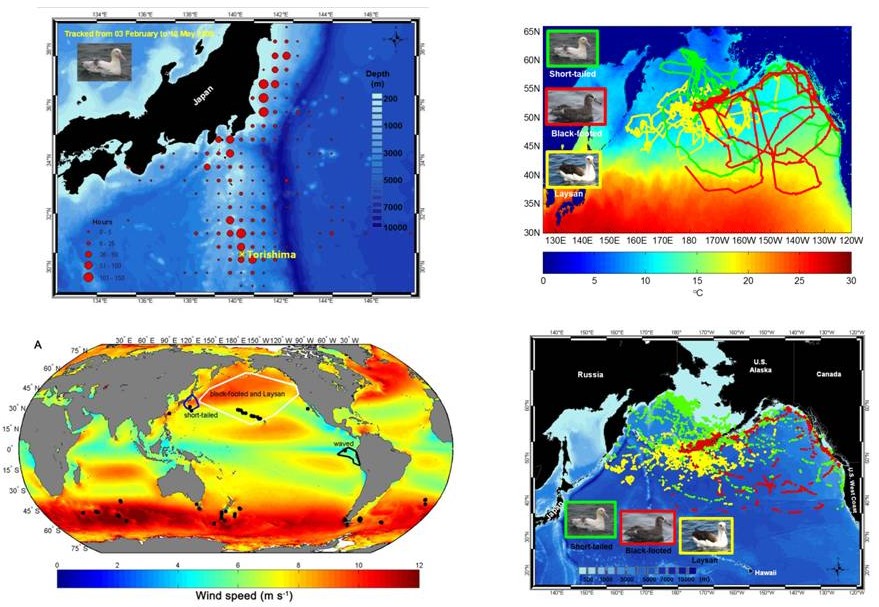 Fischer, K.N. 2008. Marine habitat use of black-footed and Laysan albatrosses during the post-breeding season and their spatial and temporal overlap with commercial fisheries. MS. Thesis Oregon State University.