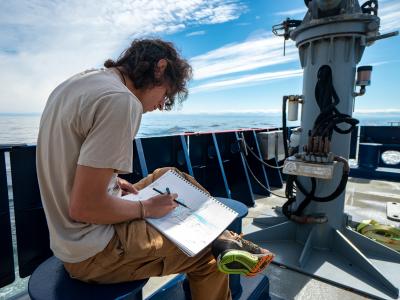 Through calm and rough weather, artists-at-sea fully engage in research while spending focused time onboard creating art from freshly collected samples and experiences of the research activities. This Artist-at-Sea program is a funded component of our NSF project MEZCAL (MEso-Zooplankton food webs in the northern CALifornia current). We worked with a local art center (Sitka Center for Art and Ecology) to broadly advertise and select professional artists to join our research team on three major research cruises. The formal application process attracted much attention in the art community and resulted in the selection of four talented and enthusiastic professionals. Their experiences at sea were varied and exciting for both artists and scientists. Social media communications about the program posted while offshore enhanced public awareness of the science and art being conducted at sea. After each cruise, the artists were invited to extend their residency for several weeks at the Sitka Center to have post-cruise time to assimilate their experiences into their art. Following the residency, the artists continued to work on their final products as well as organize their individual outreach activities, further extending the overall outreach component of the project. The culmination of the four residencies was a month-long public exhibit ‘Drifters to Swimmers’ at the Giustina Gallery, held in early 2020 at the LaSells Center in Corvallis, Oregon. The exhibit included the products of all four artists as well as ocean-themed public art contributions. It was a huge success and we are delighted with this fusion of art and science which we believe enhances both the scientific process and broadens cultural understanding of science.

Broadening the scientific understanding of our natural world is increasingly important in this day and age of global change. However, the effort to enhance awareness is not confined to nature but also includes the human dimensions of science and the people it serves. How is science conducted and what is going through the minds of scientists as they collect data? How does the human element shape the science that is done and the interpretation of observations? How do we observe, measure, and form conclusions about our natural world? 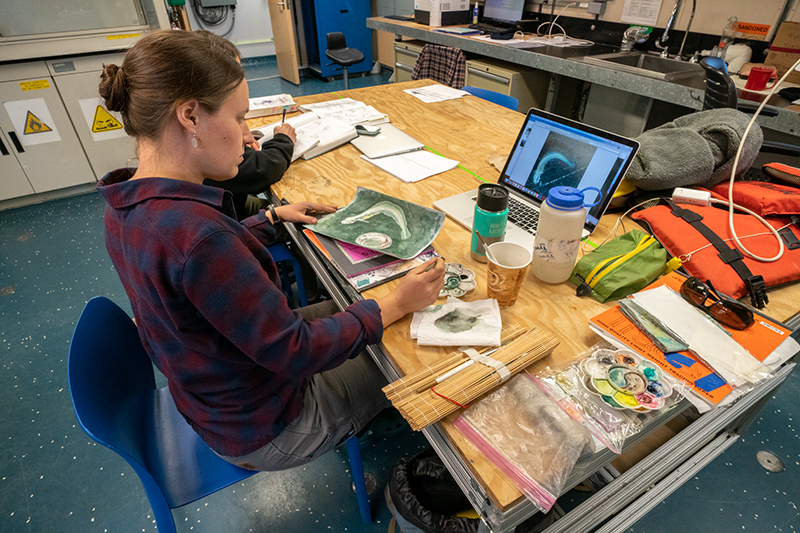 Experimental programs like the MEZCAL Artist at Sea residency program are an effort to get at the intangible ‘something’ that orbits the heart of curiosity and change in a person. Artists and scientists have a lot in common and yet are seen by society as lying at opposite ends of the professional spectrum. Stereotypically, we view scientists as rigid, narrow-bandwidth people working with facts, and artists as whimsical people working in the realm of feelings and indulgence. Both descriptions are flimsy caricatures far from reality.

Professions that demand complex practice for mastery and also share similar rigorous requirements can find crossover points of understanding with very different professions. An engineer and a medical doctor can find common ground as diagnosticians. Architects and musicians can find common ground as practitioners who create spaces that reflect and support facets of the human experience. Those professionals can both delight in the shared ground and the great differences between them and discover something wonderful, affirming and expansive in that space.

Likewise, artists and scientists share an insatiable curiosity of the world and the desire to say something about what they have discovered. Yet they rarely interact in professional spaces together. The MEZCAL project was designed to bring together these two groups during a series of major research cruises. Through this extensive opportunity for scientists and artists to work alongside each other, new levels of understanding of the process and products of these different professions have emerged, leading to a burgeoning awareness and appreciation of the natural world and the people who observe it.

Profiles of our artists:

Rebecca studied art at the University of Washington from 1977-1981 with a focus in metals. In addition, her study of NW Coast Native art exposed her to its complex designs and techniques, which informed her early carving style. The following 30 years in remote SE Alaska, in an area rich with woodcarving, gave Rebecca the materials and inspiration to focus on woodwork full time. She taught carving in the bush schools through the Alaska Arts Council and co-founded a cooperative gallery for which she created artwork.

For the last four years, and since relocating to Port Townsend, Washington, Rebecca has turned to the microscopic realm of plankton as inspiration for her sculptural and educational woodwork. The diverse shapes and fascinating life cycles of plankton, as well as their vital importance to human survival, moves her to bring attention to issues and threats facing our oceans. By creating large-scale public sculpture and playfully engaging projects for plankton education, she demonstrates the urgency to champion these tiny heroes.

Rebecca’s artwork has been exhibited in many galleries and her sculptural and functional commissions reside in private collections worldwide.

Esteban, a dual national from Eugene, Oregon, and San Jose, Costa Rica, is a visual artist who has collaborated with many communities in the Pacific Northwest, Costa Rica, and Europe to portray the beauty and significance of the natural world through the creation of public murals. For the last 14 years he has focused on ecological themed murals to explore their role in revitalizing urban spaces and communicating local values. Esteban’s first mural can be seen at the YMCA community swimming pool in Eugene, Oregon. Since then, he has produced over 40 murals committed to ecological awareness. Through the design, use of appropriate materials, and an inclusive, interactive social process, Esteban has involved hundreds of people in generating new localized, public awareness of our ecological and cultural heritage.

Kristin has been working as a natural history artist in Alaska since she received a graduate certificate in Science Illustration from California State University Monterey Bay in 2010. Her ambition as an artist is to create images that explain and tell stories about the natural world. Kristin’s hope is that her work inspires people to look closer at their own surroundings, and in that action to instill knowledge and conservation.

Kristin’s work can be found on interpretive signs, in books about national parks, and in museums. She has exhibited her illustrations and field sketches at the Alaska State Museum and received grants from the Rasmuson Foundation and the Alaska State Council on the Arts. She lives in a cabin outside McCarthy, Alaska, on the edge of the Wrangell-St. Elias National Park and Preserve.

Sarah creates art based in painting and photography, expanding into installation, collage, printmaking, and environmental art. Her work includes a range from small pieces belonging in private collections nationally and internationally to site specific installations and public art projects. In search of new materials, Sarah has become a beekeeper, studied native plant habitats, and worked as an Artist-in-Residence for a recycling facility in California. Sarah relishes discovering places that are new to her and has traveled widely through Europe, Southeast Asia, and Mexico to expand her cultural awareness and enrich her work. Recently, she was awarded residencies at Playa, in eastern Oregon, and was the Artist in Residence for Joshua Tree National Park where she created a series of cyanotypes. Previous residencies included the Djerassi Resident Artist Program, the Collegeum Phaenomonologicum, Brush Creek, and the Ucross Foundation, and Sarah’s work has been supported by the Ford Family Foundation.